We offer 3 sudoku types — classic sudoku, sudoku-diagonals and sudoku with extra zones. Each sudoku type can be played with numbers and letters.

You can also print 6 sudoku grids on a paper sheet here choosing difficulty level and sudoku type for each grid.

Sudoku is a grid of size 9x9 divided into 9 smaller squares, each having 9 cells. To solve sudoku you need to fill the grid with numbers from 1 to 9 so that numbers of each row, each column and each of the 9 smaller squares were different.

An example of solved sudoku: 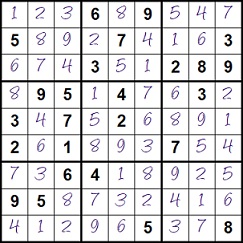 In addition to the main sudoku game there are a number of variations in which additional conditions are defined: